A short while ago, on a Friday night, Kim (aka Lo-Mad) ran one of his 'when we feel like it' Pizza nights. The night consists of us gathering for pizza at Brando's Pizza in Victoria Park, standing around outside talking cars for a bit and then heading off on a cruise before stopping for coffee somewhere at the end of the night. 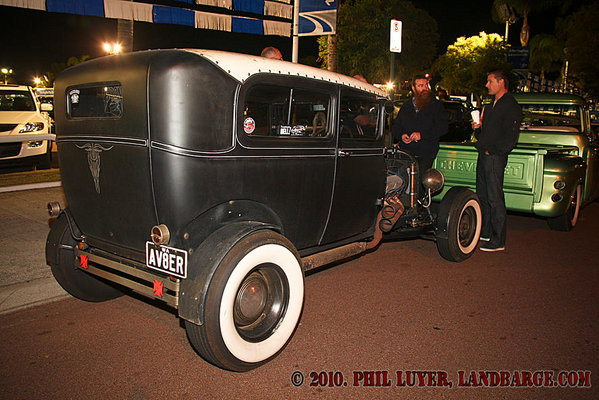 A small group made it to the gathering for pizzas at Brando's in Victoria Park, however Tuff Tin, Hey Jude and Extreme Eric were unable to join us for the cruise, which would eventually take us to Scarborough. 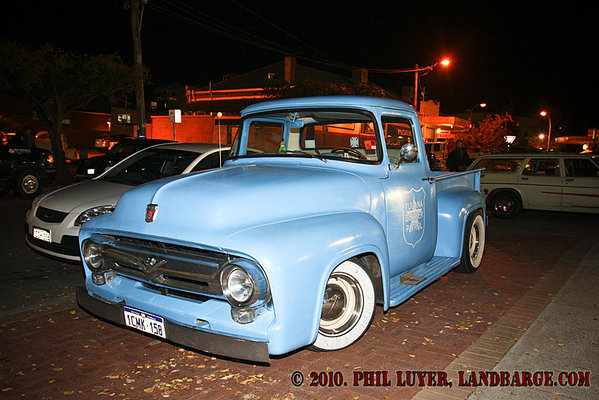 This time round, we cruised down to Hungry Jacks (To the rest of the world, it's Burger King, but that name was already taken when they opened here, so they called them Hungry Jacks instead) in Claremont (not far from where I grew up). 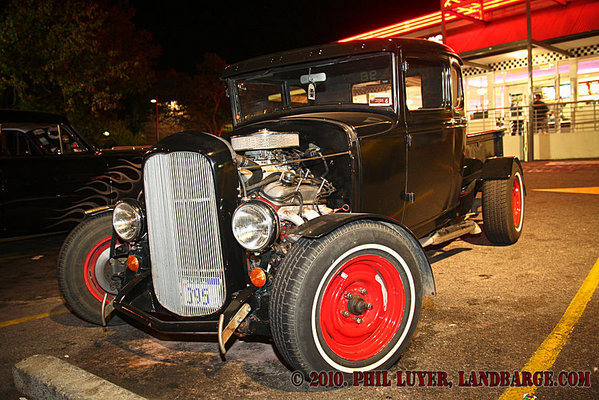 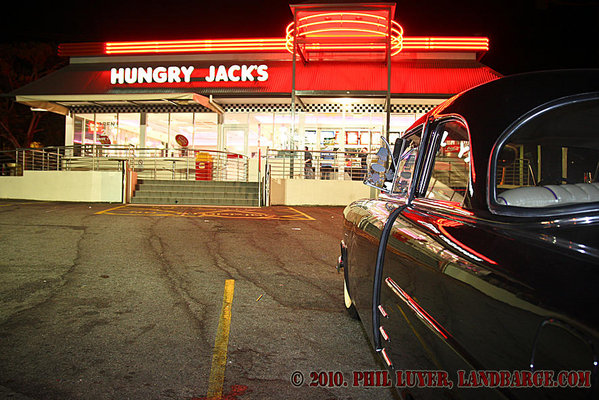 After we left Claremont, we headed down to Fremantle to cruise up and down the local strip (and to pick up Kim's other half) and then headed up the coast to Peter's By The Sea in Scarborough, where we finished the night off. 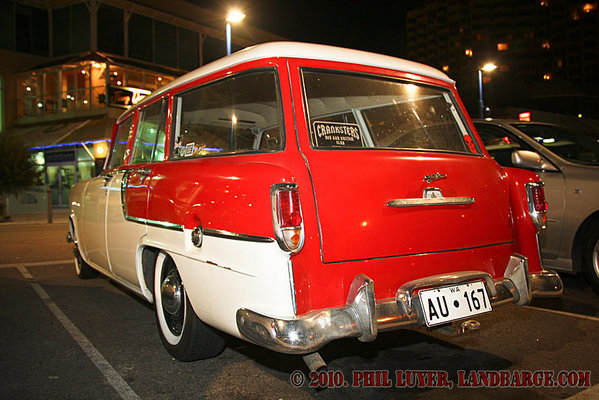 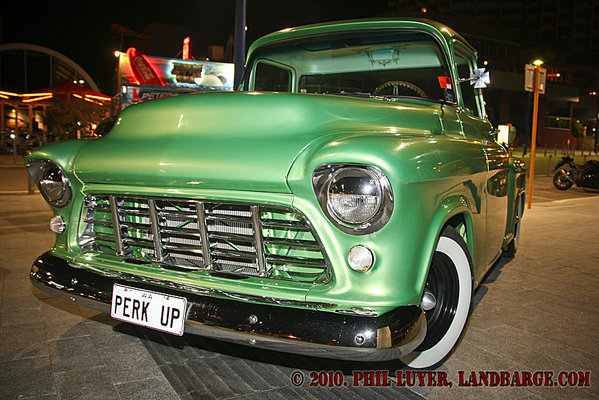 You can see more photos from the night here.
Posted by Phil Luyer - High Octane Photos at 3:22:00 PM No comments:

Over the Foundation Day long weekend, the Cranksters Hot Rod Club and members of the Goodfella's Hot Rod Club as well as a number of other interested and talented individuals gathered at Ferret Boilermaking in Maddington for the second Cranksters Winter Madness weekend. 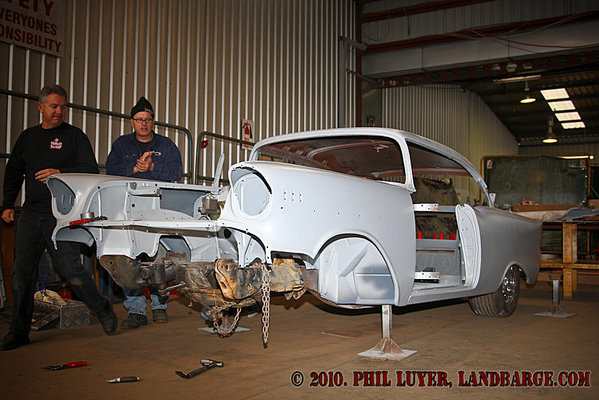 The idea of these weekends is to attempt to build a hot rod or custom over the course of a weekend. Last year it was Ben "Flathead" Forster's Los Drogas Model T coupe, this year it was Geoff "Blacky" Black's turn with his 1957 2 door Chevrolet Bel Air, the Moonshine Express. 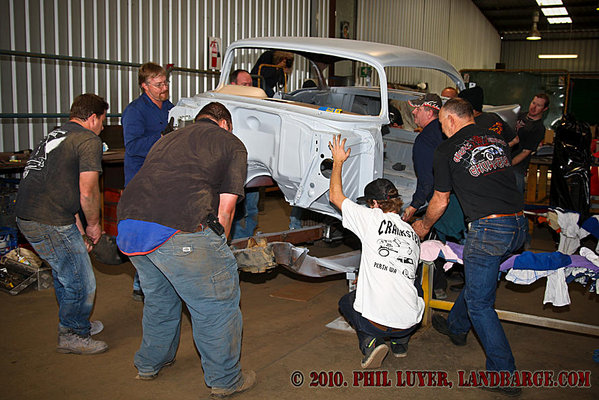 Prior to the weekend, Mick "Redbeard" Rumbold of Mick's Mods in Kalgoorlie (that's Mick on the left in the photo, if you haven't guessed from his nickname) had built a 505 cubic inch big 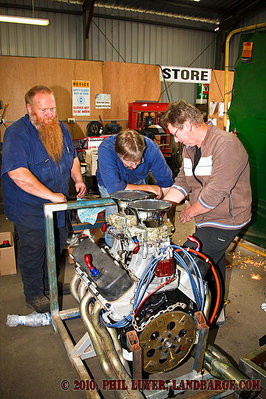 block Chev for the project, using a Dart block. Other prep work before the weekend included many hours of rust repair to the body by Blacky and Damo, who had been chosen to paint the car, and tack welding the HQ front end into the Chev chassis. Over the course of the weekend, the interior would be stripped out of the car, the body rubbed back, primered and painted. The doors were painted first, as they were to receive special treatment by signwriter Scully, who designed and painted the Moonshine Express signwriting. The body was removed from the chassis to enable the crew to split the jobs up over as many teams as possible, with separate teams taking car of the interior trim, wiring the body, preparing the chassis to be reunited with the body and polishing the multitude of chrome parts that make a 57 Bel Air complete. 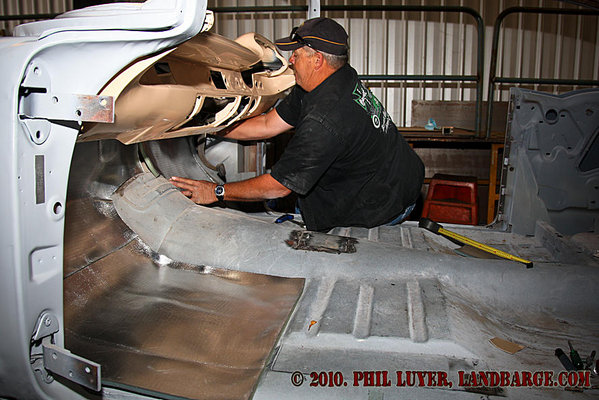 Meanwhile, Drew and Russ were busy preparing a new hood lining, fabricating and trimming new door trims and retrimming the Range Rover seats that Blacky had chosen to be his new front seats. Glenn "Watto" Watson was hard at work cutting and shaping the sound and heat absorbent matting that now covers the floor of the Bel Air and anyone who looked like they didn't have anything to do was busy polishing all the miscellaneous bits of chrome trim that would have to be fitted to the car when it was time to put it all back together. 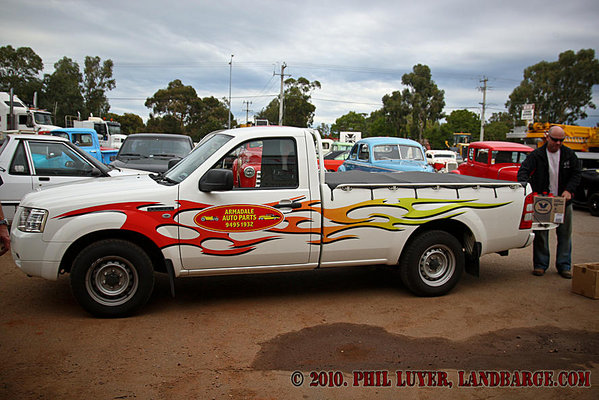 Late Saturday afternoon, the chassis team were happy with their progress and loaded the chassis onto the trailer so that Blacky could take it to the sand blasters. On it's return, it was set up for painting, as were the body and doors. 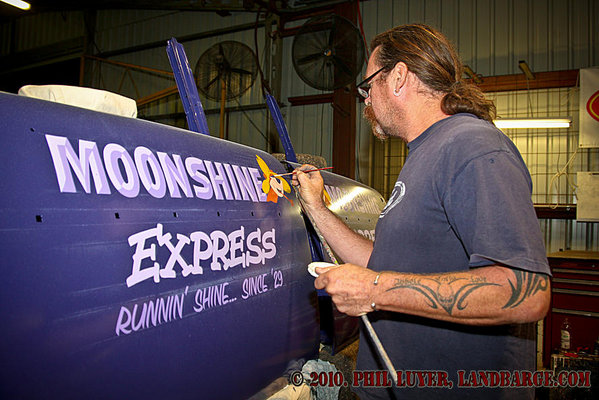 With all the major parts laid out waiting for paint, it was time for Damo and Scully to work their magic. Damo had already painted the doors in a makeshift paint booth outside, and before the rest of the paintwork commenced, Scully painted the Moonshine Express designs on the doors. Once the doors were painted, they were moved to another room and the workshop was cleared so that Damo could paint the chassis and body. The chassis was painted a standard underbody black, which the body received a coat of violet crumble purple paint with a satin finish. Both chassis and body were painted 'wet on wet', meaning the chassis was primered, then the body, then the chassis was painted black and the body in colour, with about 15 minutes between primer and colour. 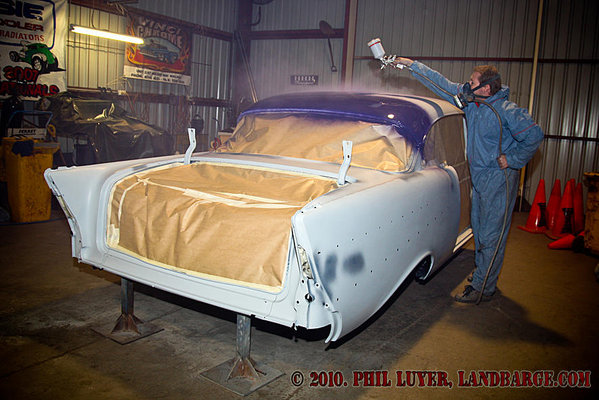 Sunday would see teams fitting brakes, brake lines and fuel lines to the chassis, fitting the Turbo 400 to the back of the big block and continuing the fit out of the body, with the steering column getting fitted and a lot more wiring being run under the dash. The dash cluster was also painted and fitted with instrumentation, which Blacky would fit later on Sunday night. 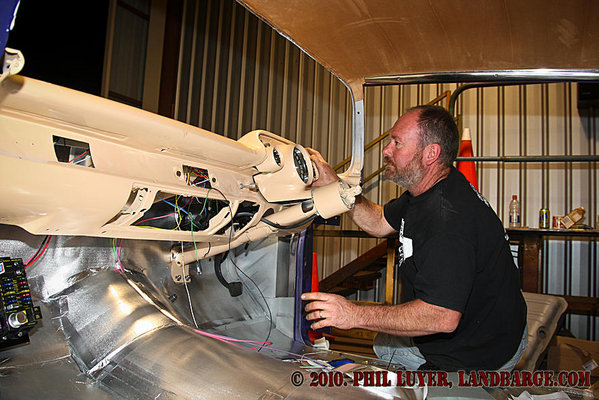 Also on Sunday night, the team would attempt to fit the big Chev power plant. Unfortunately, the 'bolt on' headers would present a slight problem, as 2 of the pipes on each side of the motor fouled on the new front end. With time and resources at a premium, it was decided that this was one of those jobs that would have to be rectified after the weekend was over, and the pipes were cut back far enough to clear the chassis. 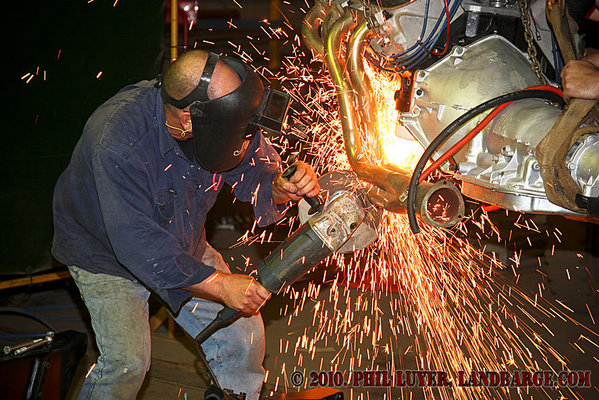 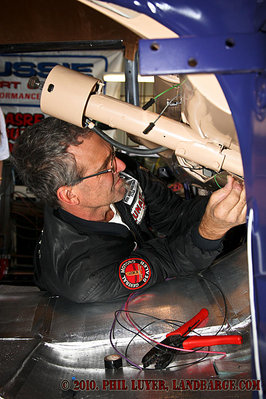 suit the motor, the remainder of the exhaust was pieced together and tied in place, the workshop was re-arranged to prepare for the mounting of the body on the chassis and tools were put down for the night.

When Monday morning rolled around, it was time to get serious about putting the body on the chassis, at which point the wiring harness could be connected to the engine and the fuel and brake lines could be finished, but before that could happen, the exaust was finished and mounted and the tailshaft loop, which doubles as an exhaust hanger, was fitted.

The glaziers were on hand shortly afterwards to fit the front and rear glass before the team gathered again to lift the body onto the chassis. 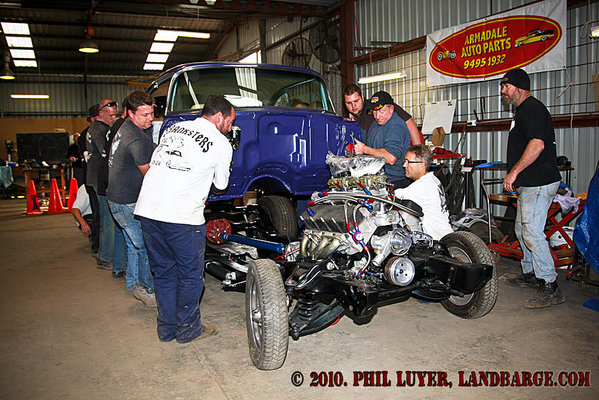 Once the body was on the chassis, it was time to finish a couple of wiring and plumbing tasks and to fit up the doors, front sheet metal and radiator. Norm and Vicki from Aussie Desert Coolers were not only on hand to film the event for an upcoming DVD, they also supplied the radiator used in the build. 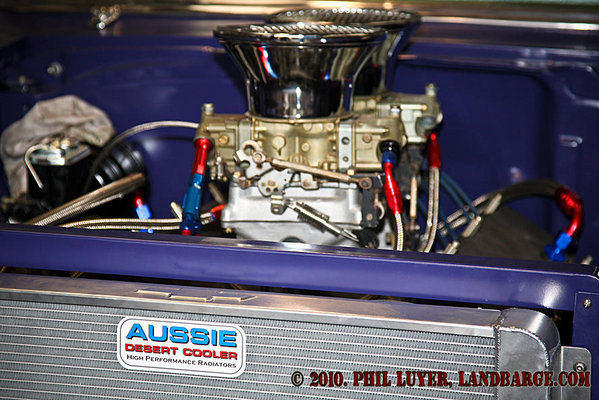 Now that everything was back together, it was time to fire up the car and drive it out of the workshop. After a few false starts, the big Chev fired and left two black stripes on the workshop floor as it left the building, coming to a stop surrounded by onlookers out the front of Ferret Boilermaking. 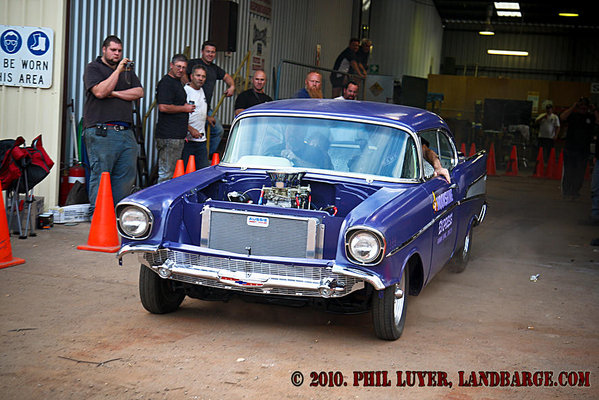 There are a lot more photos over on LandBarge.com, 396 of them in the Winter Madness 2 gallery. 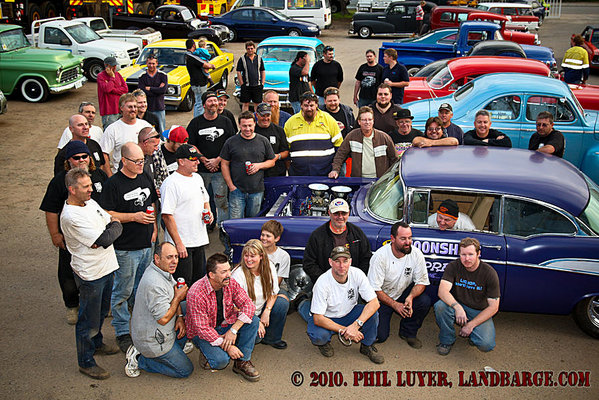