A Night Off: Wildcats vs Tigers at Perth Arena

Last night, Kate and I headed to the new Perth Arena to watch the Perth Wildcats take on the Melbourne Tigers. This was our first time at the new Arena, and watching the Wildcats run out a 20 point win was a good way to check out the new venue. 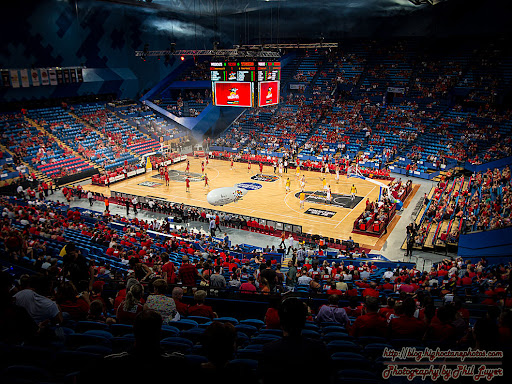 
A little unusual for me, was sitting in the stands watching, with only the Canon G1X in my hand, and it did have me wishing that I had a little more time on my hands to chase down some work at a few other sporting venues around Perth. 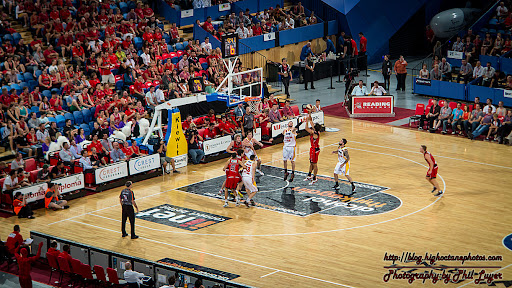 
Once again, I was really impressed by the little G1X's ability to handle low light and higher ISO's without producing a lot of noise. Not that a basketball stadium under TV lighting is really low light, but shooting from almost the top row of the stands does push things a little. 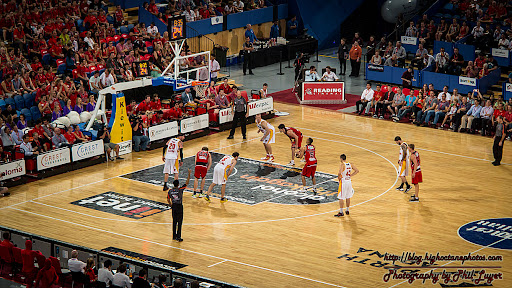 
This is the G1X at maximum zoom, not too bad for a little camera. 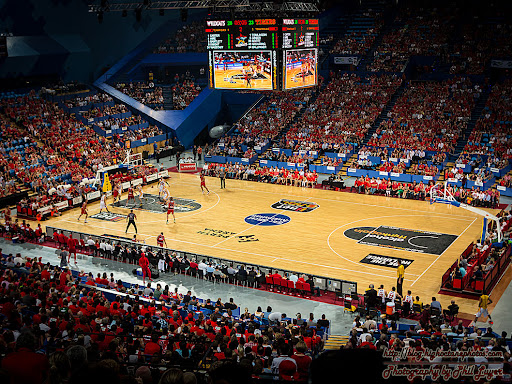 
For all the flack the Perth Arena has copped over its looks from the outside, inside it's a nicely polished deal. Although there was one thing I noticed, but didn't get a photo of, 3 well placed water coolers right next to one of the bars, with no power points to plug them into and decidedly warm water. 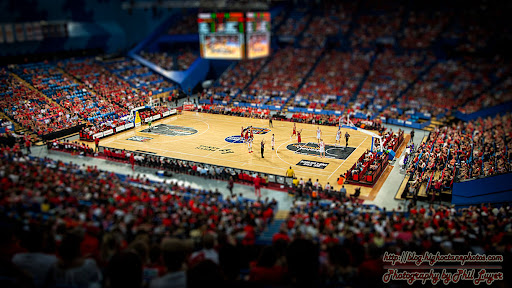 
And of course, being this far up in the stands, I just had to do some faux tilt shift.  This was done in Photoshop, although the G1X does have the ability to do this sort of stuff in camera.
Posted by Phil Luyer - High Octane Photos at 11:08:00 AM 1 comment:

Here's a few of my favourite shots from last nights Night of Fire event at the Perth Motorplex.

Antony Begley has been driving Nitro Funny cars lately, but is back in this Alcohol powered FC for the rest of our local season. 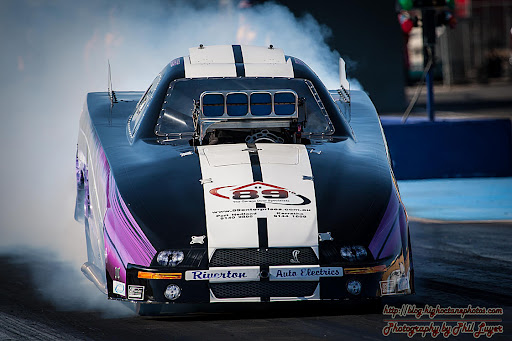 Clive Hudson has recently made a return to the Motorplex quarter mile, and is returning to his trademark big burnouts. 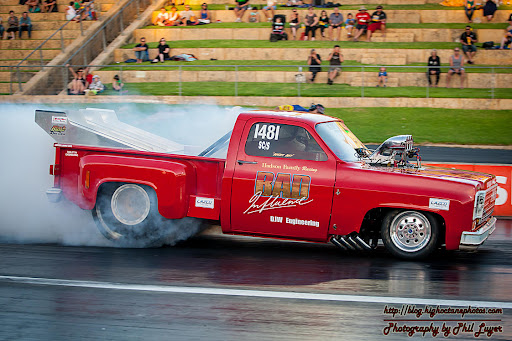 Marty Mirco took out the win in Super Sedan in his awesome Camaro. 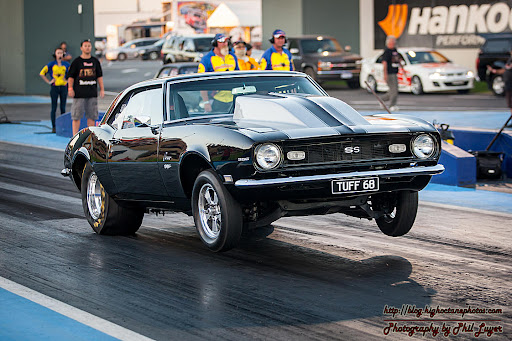 Nigel Benson was back in the Aussie Bandit wheelstander and flamethrower. Clint Urban took a win in Mod Bike on his Suzuki GSX-R. 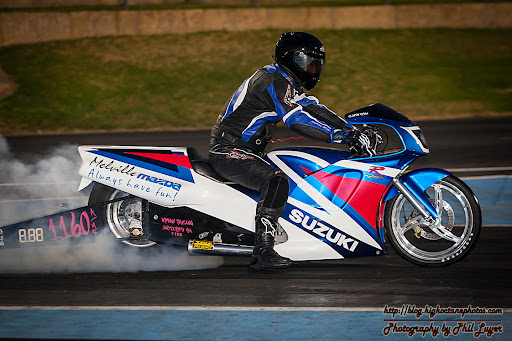 South African born Pieter DeWit, now living here in Perth, was driving the Gravity Storm Jet Dragster, and after 2 successful passes, Pieter had a chute failure in the final round, sending him into the sand trap.  More details can be found on the Motorplex website 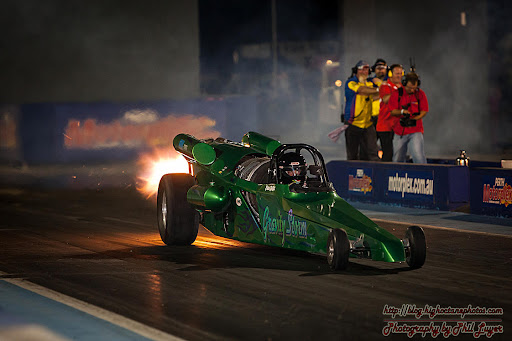 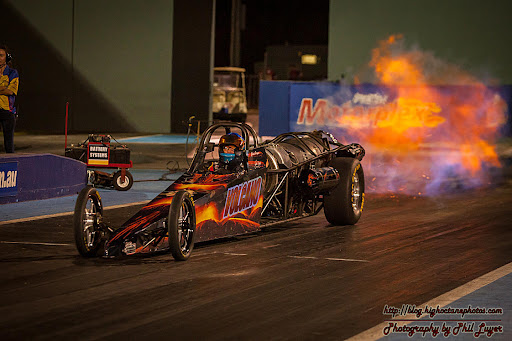 Andrew Katavatis took out yet another Super Comp win, taking him to four wins in a row. 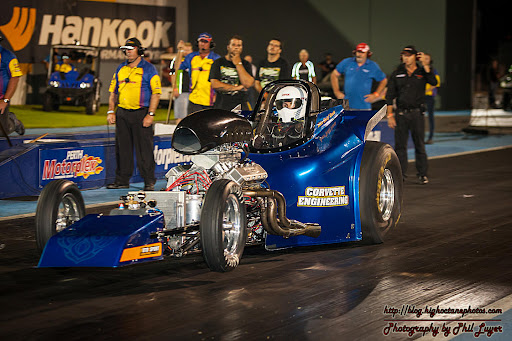 Rob Pilkington took home a win in the Top Comp 'A' final. 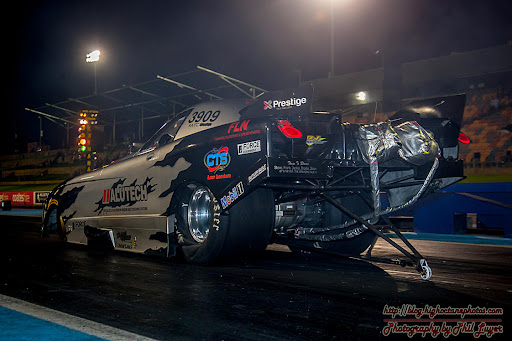 Neil Anderson held out Daniel Natalotto in a heads up Comp Bike final. 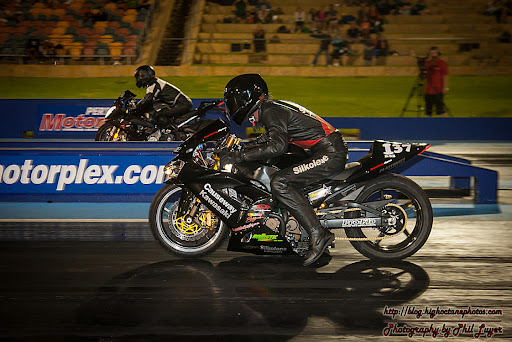 Perth's Forrest Place is home to the Twilight Hawker Markets, a weekly event for some of Perth's food vendors to gather together and showcase their menu's to a rather diverse audience, from city office workers on their way home, to dedicated food travellers looking for a fix before their next overseas journey.

Kate, Mikah and myself headed to Forrest Place on Friday night to see what all the fuss was about. Kate and I have tried a few different foods on our journeys in the past, including deep fried insects and catfish cooked on a stick on our recent journey to Thailand, so we thought we'd head in to see if we could find something a little out of the ordinary to get us through until our next adventure.

We ended up choosing 3 market stalls to visit, starting with a chicken and seafood paella, followed by a serve of satay sticks and then topped off with some asado (or beef ribs).

While in many countries, the appeal of the Hawker stalls is in the price and the variety of foods on offer, the usual Perth price and serving creep has hit here too, with slightly smaller than usual portions for slightly higher than usual prices. One of the things Kate was looking forward to at these markets were the spiral spuds she'd tried in Thailand, but at $6 for a serve, as opposed to $1 for the same serve in Thailand, they got skipped over.

I've included a few photos of the asado, as the were probably the food I was most looking forward to while waiting in the queues (and they were all that I took photos of). While overall I was very happy with the asado, I was a little disappointed with the toughness of the meat. I don't know if this is the standard for beef ribs, but with the delicious selection of spices and some very tasty and meat juice soaked fat, if the meat had been more tender it would have made it perfect. I don't feel I can lay all the blame at the chef though, as the space and time available at these markets must make these one of the hardest meals to get just right. I have a feeling that if they'd cooked these ribs low and slow enough to have the meat falling apart tender, there would have only been a handful of ribs actually available to sell, and even at the $10 a serve price, they wouldn't have been able to sell enough to make it worth while turning up.

If you want to see some photos of some of the food we ate and the markets we visited in Thailand, check out the album on flickr
Posted by Phil Luyer - High Octane Photos at 10:16:00 PM No comments: