Three months ago, Kate and I became parents to a wonderful little girl, Mikah. I have been meaning to write something about our experiences since that day, and somewhere along the line I decided to wait until our little girl was three months old to do so. 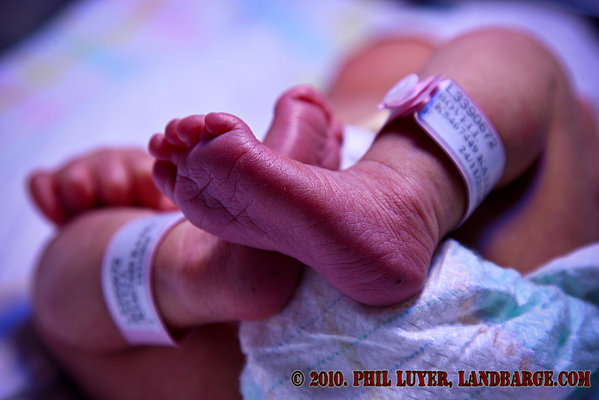 Mikah joined us at 4:42pm on the 24th of November, 2010. Looking back now, she had given us indications of her imminent arrival the night before, and Kate started having some good strong contractions around midday on the 24th, ironically, on her way home from a check up at King Edward Memorial Hospital (KEMH). At around 3pm, I received a call from Kate, asking me to come home and take her to KEMH, as she thought she was going in to labor. After an eventful trip home and up to KEMH, I dropped Kate off at the hospital doors just after 4pm and went to find a carpark. As I made it upstairs to where Kate was, the midwifes and doctors were 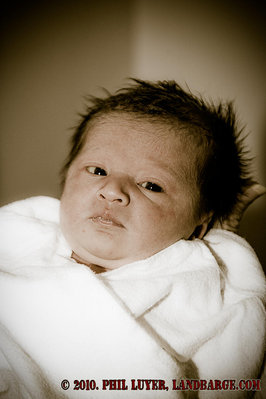 examining her to find out if she was actually having a baby or whether there was some sort of problem with little Mikah that was causing the contractions. They didn't take long to come to the conclusion that Kate was about to have a baby, and quickly located an empty birthing suite for us to use. After a little over 20 minutes of the usual grunting and groaning, pushing and squeezing, our little baby girl was born. It was shortly after this that Kate's family arrived and got to meet the new addition to the family, who at that point still did not have a name. It ended up taking us around 3 days to come up with a name for young Mikah, and we're quite happy now that we took our time, and came up with a name that is not only fairly unique, but is also very special to us.

Since Mikah's birth, 3.5 weeks ahead of schedule and weighing in at only 2.885kg, we've had the extreme pleasure of watching her grow and develop over the last 3 months. She's now weighing approximately 5.5kg, is becoming more aware of her surroundings and starting to grab at toys. She's still a little too young to be crawling or talking at this point, but is trying to roll over on occasion and will make crawling motions if placed on her belly (most babies will do this anyway, it's a standard reflex). Her neck strength appears to be improving and she will hold her head up and look around every now and then. She also appears to have taken a liking to a particular photo I've had printed from our last trip to the United States, a shot of a Nostalgia Altered mid-burnout at Famoso Raceway in Bakersfield, California.

Over the last 3 months, we've introduced Mikah to many new people and experiences, most of which she's probably oblivious to, but no doubt these will shape her life in some way in the future. Mikah's already been to several major drag racing meetings at the Perth Motorplex and gotten up close and personal with Robin Judd's Top Doorslammer and Darren Morgan's Top Fuel Dragster. She's been to see drifting at Wanneroo Raceway, and partied like it's the 50's at Mike Naylor's 50th birthday party. I'm already looking forward to the day when we can take Mikah travelling with us, and trying to work out how old I want her to be before we take her to the USA with us, which will be a delicate balancing act if we're going to continue driving old cars with unreliable air conditioning through some of the hottest parts of the United States.
Posted by Phil Luyer - High Octane Photos at 9:51:00 AM